“Share the continuing story of the Wakefield twins and their friends –their laughter, heartaches, and dreams.”

As an introduction, Double Love sets one thing straight:

Jessica Wakefield is a bitch. 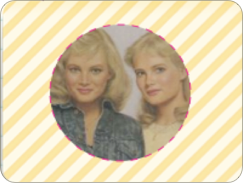 Sorry, Jess, but there’s no other way to put it. Todd Wilkins, the new boy in school, doesn’t interest her in the least, until she realizes that he’s not interested in her either— with this she cannot cope. So she wigs out and pulls a major “if I can’t have you, no one can.” As if that weren’t enough, the “no one” in this case is her own twin, Elizabeth. She’s totally into Todd, but because of Jessica’s scheming, Liz thinks that Todd’s after her twin. Ever the obliging doormat, Liz stifles her broken-heartedness and actually tries to be happy for Jessica! Come on. COME ON! It is only book one though...Elizabeth only had 130 pages to figure out that Jessica is a soulless liar :).

I suppose only time will tell if the extremes of Jessica’s selfish, bratty bimbo and Elizabeth’s studious, conscientious good-girl will even out as the series continues. The truly weird thing is that it seems that we readers are not supposed to pass judgement on either of them, but just to accept that they are different, but both great. What makes them so great? I have a feeling it’s the fact that they’re really pretty. When the book starts, the first thing we learn about Jessica is that she’s “about the most adorable, most dazzling sixteen-year-old girl imaginable.” The only trait that sets Liz apart is the “tiny beauty mark” on her left shoulder. Pages 4-182 are devoted to their inner differences, but rest assured, the first 3 are where the heart of the Sweet Valley series really lies.

Editor's note: Are you looking for the 2017 podcast episode on Double Love? Click here to rocket into the future!

The comments to this entry are closed.