“Will Jessica break Bill’s heart, too?” 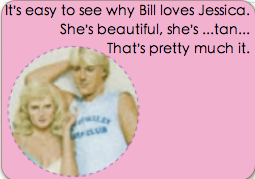 Sometimes in the world of Sweet Valley, the title says it all. But in the case of Book 8, I truly could end my summary with a single quote from Chapter 1, describing Jessica’s thoughts on Bill Chase, the other central character of this book: “Once upon a time, she’d asked him to a Sadie Hawkins dance, and he’d done the unforgivable – he’d turned her down. Jessica never forgot an insult, especially one as serious as someone refusing the golden opportunity to go out with her. Bill Chase was only getting what he so richly deserved.”

I couldn’t have said it better myself, and it’s nice to see that the author and I are on the same page here. There’s a biting sarcasm in those words that foreshadows Jessica’s eventual failure, but unfortunately for the residents of Sweet Valley (and maybe for us), that failure doesn’t come until page 129 of 134.

At the end of Book 7, Jessica decides that while her mentally unstable sister is out almost-fornicating with Bruce Patman (if you didn’t read about Dear Sister, it’s a doozy), she spies a prime opportunity to get back at some dude she doesn’t care about because he turned her down once. Bill Chase is a surf king, a loner, and perhaps the most genuine character we’ve seen so far in Sweet Valley – not that he’s had much competition. OK, so he did let Jessica trick him into falling for her by pretending she was Elizabeth. And he does only really like them in the first place because they look like his dead girlfriend. But he’s experienced real loss, loss that he keeps a secret, and in the end he realizes the difference between love and infatuation.  I don’t usually have much sympathy for a character who lets a bitch like Jessica have her way, but his interest in Jessica is largely due to her cruel manipulation and his own psychoses. When he gradually realizes that DeeDee, a less flamboyant girl, both shares his interests and genuinely likes him, he slowly realizes how stupid he’s been.  Bill finds love in the end, even if the girl he loves is slightly less attractive then Jessica. With freckles.

Heartbreaker was really a pretty decent little book, but it had all of the classic SVH ingredients that make me cringe. Liz defends Jessica’s behavior and gets pissed when Todd suggests Jessica’s up to no good. We get a precise description of exactly how pretty or ugly each new character is, from super stud Mr. Wakefield to “frizzy haired Olivia Davidson.” And there’s this one other thing...I’m afraid I’m going to have to devote a little time to the subplot here, something I typically avoid. You see, it’s the small matter of Todd and Elizabeth.  I pledge to you here and now, people, if they almost breakup again in Book 9, I am going to FREAK OUT. I swear, I will revoke their title of perfect couple INDEFINITELY!

In my review of Dangerous Love, I mentioned Liz’s uncharacteristic and all-consuming jealousy of any girl Todd comes near (not my EXACT words), but this was admittedly based on little evidence. Well, in #8, a beautiful girl, inexplicably named Patsy, returns to Sweet Valley after a few years living in France. Patsy is Todd’s ex, but he lets Liz know that they are just good friends now. As her good friend, he spends time with her.

It’s understandable that this situation makes Elizabeth jealous, but it’s the way that she deals with it that makes me fume. First, she notices that Patsy is gorgeous - like Bo Derek! Then, she finds out that Todd and Patsy never really broke  all those years ago. She puts two and two together and realizes that Todd is going to break up with her. But she never says ANYTHING to Todd about it! She just avoids him, and the “inevitable.” Harumph! And aren’t the Wakefield twins supposed to be, like, the most beautiful girls ever? This is really just too stupid. Todd and Liz – especially Liz – consider yourselves warned.

Speaking of future books, I expect we’ll be hearing more about Roger Barrett. I say this because he was brought up time and again in this book, despite the fact that his presence had no bearing whatsoever on the plot. All you need to know: he’s unpopular and in love with Lila Fowler. Ahh, the cycle continues.

If you're in search of the 2018 podcast episode about this book, look no further.