“Can Jessica face life without Elizabeth?” 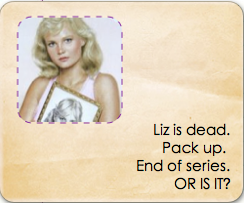 When it comes to plot devices, it’s hard to top a nice, convenient coma. Soap operas have been using them for decades as a great way to get characters out of the way, nullify relationships, and generally spice things up. But the juiciest plots often stem from a sort of coma-induced “rebirth”, when the sufferer awakes as a completely different person. It may seem farfetched, but it makes for an interesting change of pace when you’re trying to fend off a 7th-Book Slump.

All of the Sweet Valley novels have ended with a kind of lead-up ending to pave the way for the following book. As I mentioned in the previous installment, Book 6’s cliffhanger was as dramatic as ever, even if the ultimate question, “Will Liz live or die?!?!!” wasn’t exactly fooling anyone. Happily (?) the drama does not end with Elizabeth’s coma, which she pointlessly remains in for a WHOLE CHAPTER of Dear Sister, until Jess can miraculously rouse her with a rare, honest confessional. No, no, the story only begins there. Right away, something is mysteriously different about Liz.

Suddenly, Liz cares about her appearance first and foremost, borrowing makeup from Jessica so she can look her best for Todd, whom she still rebukes for complementing her. Much to my dismay, “new Liz” finds that Todd leaves a bad taste in her mouth. Todd, of course, assumes that she is angry with him for almost killing her with his death-trap Yamaha. Now, you and I both know that the real Liz would blame the drunken driver that hit them, not Todd, for her coma. But this new Liz doesn’t even care about the coma – she is just tired of Todd. She wants to play the field! Dammit, for such a perfect couple, Todd and Elizabeth sure can’t manage to stay together for more than 40 pages. It doesn’t help matters that Elizabeth begins flirting with as many guys as possible during her waking hours and immediately uses her recent coma as an excuse to rest when it’s time to do some work. It’s almost as if...oh my God. OH MY GOD. ELIZABETH HAS TURNED INTO JESSICA!!

We are angry, very angry. We hate Jessica, and now there are two Jessicas and NO Elizabeths to balance them out. But, faced with the grim specter of, well, her own awful self, Jessica (the real one) begins to act more responsible, not just begrudging Liz all the fun she’s having, but resenting having to do the work of two people herself, cooking, cleaning, and occasionally saving face for her “Dear Sister.” In a kind of backwards way, this book confirms the suspicion I’ve had from the get go:, that the Wakefield twins are, if not Good VS. Evil, at least Good hanging out with Evil.

Of course, for the sake of the series, things have to return to some form of status quo by the end. In Book 7 it occurs in grand form, with possibly the greatest scene yet for Sweet Valley. In her post-coma, Jessicafied dementia, Liz entices no less a villain than Bruce Patman to whisk her away from the crowd to his beach house, where the two do some heavy petting in various rooms before winding up in the master bedroom. Think about this for a second. How amazing would it be if good-girl Elizabeth actually had sex with her mortal enemy, Bruce Patman, and woke up the next morning, her old Liz self, totally unaware of where she was or what she had done there? So amazing. And if Sweet Valley were a real, televised soap opera, that’s exactly what would have happened. Instead, while Bruce is fetching some wine from the kitchen, Liz falls and hits her head on a nightstand and suddenly has no idea where she is or what she is doing. No sex. But it’s still awesome when Bruce Patman walks in, raring to go, and Liz reacts with befuddled disgust. She actually has to bite him and threaten blackmail to get out of there, and she runs straight into Todd’s arms. Ahh, Todd. That’s much better. The end.

Seriously. The book ends there, no wrap up, no nothing. I follow suit.

In search of the 2018 podcast episode about this book? It's here.