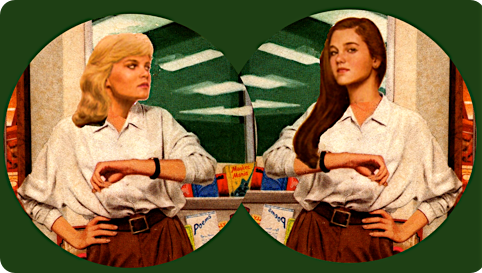 Sorry for making you wait, but now that you're here, wouldn't you like to know about the hilarious B-Story from Secret Admirer? This is the REAL B-Story, not that "let's get back at Kirk by pretending this model wants to date him" nonsense.

If you've been following along, you know that Sweet Valley High's newspaper, the Oracle, has introduced a new personals section. I'm not sure why anyone needs a dating service in a school that seems to have about 100 students, but that's neither here nor there. And it just so happens that some non-highschoolers receive the paper, too. Let's forget for a second that this is kind of depressing. It's critical to Jessica and Lila's plot.

Because she is obsessed with dating, Jessica thinks the new personals section seems like a lark. Lila, however, thinks it seems desperate and doesn't care to date highschoolers at any rate. A minor argument over these points spirals into a competition between the two girls; they will both place ads, specify that they aren't interested in mere boys, and see who comes up with the hotter date.  The contest goes beyond mere luck-of-the-draw, however (thank you, mystery author!). Believe it or not, the girls have a more technical disagreement here, about what makes the most enticing personal ad. Jessica plans to make a call for the type of guy she wants; Lila plans to advertise what kind of girl they'll be getting. In the end, Jessica’s reads like a casting call for a date rapist (seriously) and Lila’s sounds like it’s describing someone truly awful (oh hey, it is!), but the plan is set in motion.

Jessica is thrilled when she receives a response from the sexy-sounding Paolo, who comes off like a real Casanova (this appeals to Jess of course). Sure she'll win the Battle of the Blind Dates, she starts counting the hours until she and Paolo will meet.

Oops. Looks like Jessica left something out of her call for bachelors: "No Fatties.". Paolo is pleasant, interesting, smart, and he speaks Italian. Yet Jessica spends the entire date trying to figure out a way to go home early, because he's fat. How was she not prepared for this eventuality? I know this is Sweet Valley, but there must still be some statute of limitations on hot people per capita. The entire risk and benefit of personal ads hinges on the fact that you're attracted to something on paper, not approaching someone based just on their appearance. Duh. The days of rescue-calls on your cell phone still over a decade away, Jessica makes up a lie about feeling ill and escapes back home without being seen. Ladies and gentlemen, her feeble conscience:

She frowned as a little voice inside told her she’d just played a mean trick on a polite, friendly, and interesting boy. But she ignored the voice. After all, she couldn’t help it if she simply couldn’t stand to be around fat people.
-p. 79

Loudest possible groan! Jessica’s experience with Paolo makes her dubious of future match-ups, but she’s in luck, as another collegiate gentleman thinks it’s cool to hook up with 11th-graders, and this one is cute! Sure, this John character can’t quit asking her questions that seem tied with his sociology class, and he has to rush home to study rather than extending their date, but Jessica takes this in stride, even relishing his interview-style questions. She mentions that she likes “doing exciting things,” and John asks her to elaborate:

Jessica considered briefly. “I guess you could say I like a dare. I’ll do anything once – and I’ll do it again if I like it,” she added suggestively.
-p. 105

Suggestively indeed. After this disgusting display, Jessica’s sure she’s got John hooked. He has to run off and study, but they meet again at the university’s snack bar, where he asks her, “Jessica, what made you write that personal ad?” The date continues in this manner until John must excuse himself again, but not before agreeing to meet Jessica at a free beach concert on Saturday. She’ll introduce him to Lila, and their secret contest will be as good as won. And even though John says he can’t come to the dance with her that night, Jessica thinks she’ll be able to persuade him on the spot.

Come Saturday, both Lila and Jessica feel confident that their respective dates will be found superior. They’ve filled in half the cheerleading squad, who will come along and serve as additional judges. “Of course, they had to be subtle enough so that the two boys didn’t know they were being compared like prize livestock,” our wonderful author chimes in on page 126. Walking toward the beach, they realize that their dates have the same name, John. Well, it is a common name. Then they each spot their man. They have spotted the same man, and he’s surrounded by a whole bunch of other girls. He’s standing next to a girl whom he introduces to the crowd as “Faye, my partner on my sociology project. And my girlfriend.” Uh-oh! Turns out that John was dating as many girls from personal ads as he could, all in the name of science. “You see, I wanted to see how people presented themselves in personal ads, and what they thought was appealing about themselves, so I answered all of your ads.”

Ha ha! The mean girls get their comeuppance…as do a lot of presumably nice girls. I hope that John’s not hoping to publish his research, because an ethics committee would have a field day with his selection methods, his procedure, and (most of all) his debriefing process. Yikes! Cara laughingly declares that Lila and Jessica are both winners, but we know better. 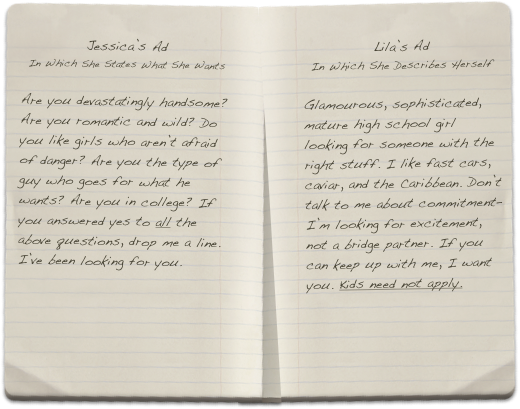 There's one more thing about this book that managed to sneak up on me: it's #39. That means the next book is #40. What happens in Book 40, you ask? Well, you can certainly do a little Internet research and find out, but those of you who are versed in your Sweet Valley lore can read the context clues in a quote that comes near the end of this book:

“Some oral report he’s been really wrapped up in,” Regina answered hesitantly.

“Isn’t that nice.” Jessica kept her eyes fixed on her own reflection, but her mind was rapidly going over the students she had seen the the gym just moments before. Was Amy Sutton there? She had been with them at the beach, but now that Jessica thought about it, she couldn’t remember seeming Amy at the dance...Could Amy’s plan to snare Bruce actually be working?

The comments to this entry are closed.